In 1943, a few local writers from southwest Missouri decided a writers’ group was needed. The Springfield Writers’ Guild (SWG) was formed with the first president being Donna Ashworth Thompson. It is one of the first chapters of the Missouri Writers’ Guild (MWG) which was founded in 1915 by Walter Williams, the founder of the University of Missouri’s School of Journalism in Columbia, MO. There are sister chapters all over the state. The SWG operates as a non-profit organization under the State of Missouri with a license that is renewed bi-annually.

Meeting at the Heritage Cafeteria – Springfield – 2015

The goals of the Guild are simple. To promote the craft of writing we will:

The Guild’s annual membership averages around 100, with some members attending from other states like Oklahoma and Arkansas. Two “at-large” members live in California and Oregon. It is a diverse group of writers representing multiple genres … science fiction, fantasy, horror, mystery, thriller/suspense, romance, women’s fiction, inspirational drama, and variations of all. The group includes a mix of men and women, young and old. There are scriptwriters and songwriters as well as historical and creative nonfiction writers. The writers gear their stories toward children, young adult, and adult audiences.

Former long-time member, Lee Ann Russell drew up the first By-laws and SWG constitution in 1986. It was updated and revised in August 2013 by Yvonne Erwin and the Board of Directors when the need was seen to offer full membership to all who had an interest in writing, as opposed to only published writers. The Guild elects a president, vice-president, secretary, treasurer, and director-at-large annually. The President then appoints a webmaster, mentor hour leader, and historian. A historian was added to the appointed leaders in 1986. LeeAnn Russell served as the Guild’s historian from 1986-2016 until she passed.  (see below)

The Beginning of Mentor Hour

In 1996, a mini 50-year history was published under the leadership of Wanda Sue Parrott, president. In that same year, the first SWG Mentor Hour was held. According to Parrott, “It wasn’t called ‘Mentor Hour’ at first. People donated $1 to attend from 11 a.m. until noon and then stayed for lunch and open mic readings, playing music and even singing while we dined together. It slowly grew, but only a few participated in those early days. People liked to go into the dining area and mingle. If memory serves me right, Tom Withers named it ‘The Mentor Hour’ and Larry Cunningham was in charge of it.”

Today, Mentor Hour (held from 11:00-noon) is one of the highlights of each monthly meeting where Guild members bring a sampling (three pages) of their writing for feedback and constructive critique by other members. It is a time of learning and camaraderie, and sometimes mild bantering and fun. Nick Weyland is the appointed Mentor Hour coordinator.

In 2002, the first SWG membership directories were printed and given out to members. Three years later, in 2005, the Guild almost disbanded due to lack of members and leadership until Phillip Hood volunteered to serve as president. Under his leadership, the group grew and found stability. Hood directed the Guild to hold a writers’ conference in 2006 and also started the SWG website in 2002.

In 2007, Terry Smith was named the Guild’s Webmaster and continues to serve in that capacity. The website was updated in 2015 by President Wayne Groner and again in 2017 by President Yvonne Erwin. Candy Simonson assisted with the update and changeover from Yahoo sites to WordPress with a “free” site.

Other honorary lifetime members (HLM) include Marilyn K. Smith (joined 1986), Larry Cunningham (1987), Theresa Bade (1988), and Wanda Sue Parrott (1988). Smith, Cunningham, Bade, and Parrott became HLMs in 2013. Bade served as president from 1997-1998; Cunningham was elected president in 2011; Parrott was president in 1996, and Smith served several years as Secretary and Director-at-Large. In order to be accorded HLM status, a member must be consistent in attendance for twenty-five years and served the Guild in some type of leadership capacity.

LeeAnn Russell (7/26/42-1/11/2017) had the longest running time on the SWG Board, serving a total of 30 consecutive years in every possible capacity.  Russell loved the Guild and served as President in 1986-1987 and 2007-2008.  She was also was Vice-President three times; Secretary twice; Treasurer two times; Director-at-Large eight times; Contest chair four times; and Historian from 1993-2016.  She joined the SWG in 1974 and took special pride and honor in preserving the Guild’s archives.  In 1999 she was accorded the title of Honorary Life Member.  An award-winning poet and photographer, she placed over 800 times in various contests.  Her booklet, How to Write Poetry, From Ballad to Villanelle helped many poets.  Russell passed January 11, 2017.

The first anthology was put out by the Guild in 1995 under President Barbara Quin.  The most recent anthology, Creative Collections, was published in 2015 under President Wayne Groner and is currently available on Amazon. It highlights stories of SWG members with nostalgia, romance, science fiction and more. 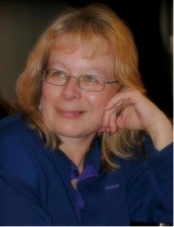 Yvonne Erwin was recently elected as President for the 2019-2020 term, which will give her the longest running time as President (2012-2014, 2016-2018, and 2019-2020).  She has served on the Board for ten consecutive years, serving also as Vice-President, Secretary, Director-at-Large, and Contest Chairperson.  Erwin is the author of women’s fiction and has three books on Amazon: Discovery of Joy; The Sisters of Madelaine Lane, and A Glimpse of Glory.  You can find her at y-write.blogspot.com.

Springfield Writers’ Guild meets the fourth Saturday of every month (except December) at McAlister’s Deli, Battlefield and Kansas in Springfield. Mentor Hour (11:00-noon) – Lunch with fellow authors/writers – Speaker (12:30-2:00). Yearly dues are $15 (renewable in January). Visitors are welcome at no charge.